WHERE ARE YOU HEADING THIS LONG WEEKEND 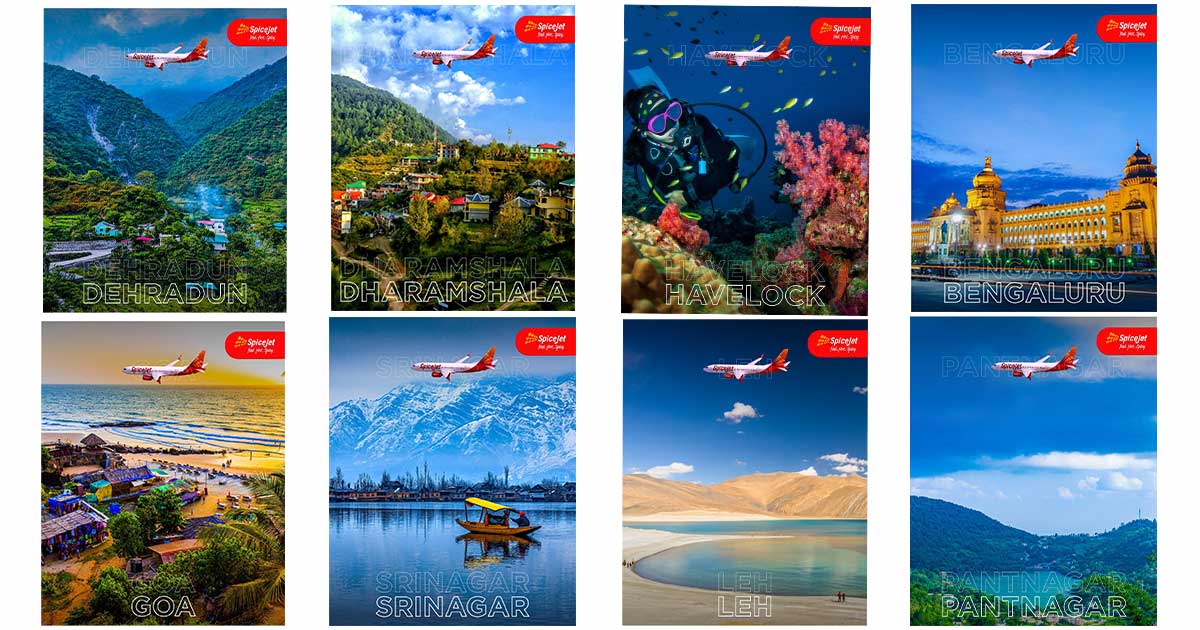 Choose Spicejet and prepare to enhance your flying experience by receiving not just a more comfortable and roomy seating selection, but also a slew of useful amenities and priority privileges for a little fee.

Srinagar, the most picturesque city in Kashmir, is a diamond in the valley's crown. Srinagar is the summer capital of the state of Jammu and Kashmir, located on the banks of the Jhelum River. Beautiful houseboats, fine handicrafts, and dried fruits are also popular in Srinagar. If you're planning a trip to North India and want to get a flavour of authentic Kashmiri culture, a stop in this city is a must.

Traditional Kashmiri food is a one-of-a-kind culinary experience with a sumptuous buffet. Kashmiri cuisine, which uses rich foods such lamb, turnips, chicken, spinach, fish, and lotus, would appeal to both vegans and non-vegans. Cinnamon, cardamom, cloves, and saffron are among the spices used to improve the flavour. If you're on a culinary adventure, don't overlook Kashmiri food. The Wazawan, a 36-course feast, is served during Kashmiri weddings, and it combines the richest and most delectable flavours. Desserts aren't on the menu, however Kahva or green tea is a popular way to cap a meal.

Goa is a former Portuguese colony with a long and illustrious history, as well as a unique blend of indigenous and Portuguese cultures and architecture that draws visitors from all over India and the world. Because of Portuguese control, which separated it from the rest of India for almost 450 years, it is obviously distinct from the rest of India. Goa, India's tourism hotspot, is a destination with enticing attractions, with its swaying palms, beautiful dunes, and sparkling waterways. Panaji, the capital of Goa since 1843, is one of India's most attractive cities. The majority of people utilise it as a connection to ancient Goa or the beaches.

Rice and fish curry, as well as fried fish and pickles, are staples of the Goan cuisine. There are several eateries in Goa that serve delicious seafood, and the shack dining experience is not to be missed.

Our trip to Goa isn't complete without bringing home a keepsake. Goa is such a vibrant state that you won't be able to decide what to buy, but where to shop may be a problem! It's difficult to decide where to shop when there are so many options! Local marketplaces and beach shacks abound in Goa, selling anything and anything under the sun. The night markets of North Goa, in particular, provide an astonishing variety of global commodities. Hand-painted ceramics are one of Goa's most distinctive products. If you enjoy reading, Reading Habit, on the road to Miramar Beach in Campal, has a vast selection of books. Mapusa and Anjuna are two of Goa's greatest shopping destinations. The state-run Goa Handicrafts network's Aparant network of stores offers good value for money and is typical 'Goan' shopping.

Arambol
Arambol, also known as Harmal, is located on the tropical west coast of Goa, about 35 kilometres from Panaji. With a population of less than 10,000 people, the settlement is a typical fishing community. The fresh sea wind and swaying palm palms provide the perfect holiday mood, making it a wonderful spot to spend some time in utter peace and tranquilly.
Agha Khan's Children's Park
Abdul Javerbhai Mavany, a merchant from Margao's miniscule Agakhani minority, created the northern section of the Margao municipal garden. He did so after cancer claimed the lives of two young children. Vassalo e Silva, Goa's final Portuguese Governor General, dedicated the park in 1959. Cotigao Wildlife Sanctuary
Cotigao Wildlife Sanctuary is Goa's second-largest wildlife sanctuary, located in Canacona. It has a very flat topography with hills in the south and east. The sanctuary is mostly covered in deep woods, with only a few patches of open grassland. The density of forest crowns is frequently around 60%. Dudh Sagar WaterfallThis is one of India's tallest waterfalls, as well as one of the world's top a hundred. It is located in the southern portion of Goa, near the Karnataka border, at Mollem. In the indigenous Konkanni language, Dudh Sagar literally translates to "Sea of Milk," and it derives its name from the fact that it resembles an overflowing sea of milk. The water fall is at its highest flow during the monsoon months of June to September, with a total height of 306 metres and a breadth of 30 metres. With a height of 310 metres, Dudh Sagar Falls is India's fifth highest waterfall.
Anjuna Beach
Anjuna Beach, also known as the "Freak Capital of the World," is located 18 kilometres north of Panaji. Anjuna Beach is known for trance parties and hippies due to its swaying palms, smooth sands, and natural beauty. It's fantastic for swimming and sunbathing. On Wednesdays, Anjuna is recognised across North Goa and to visitors from all over the globe for its flea market on the beach, where visitors can find everything from Indian trinkets to Trance music.

Dehradun, located in the foothills of the Himalayas, provides an unrivalled view of the Himalayas' magnificence. Dehradun is a gateway to other Himalayan hill stations such as Mussoorie, Nainital, and Auli, and is nestled between the Ganges and the Yamuna. Do you have a strong desire for divine intervention? Dehradun is also adjacent to the holy cities of Haridwar and Rishikesh, as well as Char Dham, a pilgrimage destination.

Dehradun has lots of handicrafts to offer if you have a soft place for them. Local craftsmen' exquisite wood crafts, antiquities, and utilities will undoubtedly satisfy. The local clothing business caters to Dehradun's mountainous climate, with exquisite sweaters and trendy cardigans being notable examples. Your hunger for mementos will be whetted by local artwork and accessories.

Robber's Cave
The Robber's Cave, or 'Guchu Pani' as it is called locally, is a popular picnic place located 9 kilometres from the city centre. The Robber's Cave is remarkable in that a trickle of water gushes beneath before unexpectedly reappearing just a few metres distant.
Sahastradhara
The cold sulphur spring of Sahastradhara located at a distance of 14 km from the city centre is known to have healing properties. The 9 meter high waterfall also serves as a picturesque spot for photography enthusiasts.
Malsi Deer Park
The park is located in the foothills of the Sivalik range, 10 kilometres from Dehradun on the way to Mussoorie. Mountain wildlife includes deer, the Neelgai, ducks, and a variety of unusual birds. The zoo also contains a children's play area, which makes it a popular destination for families on vacation.

Get full PG cashback
on every PNR